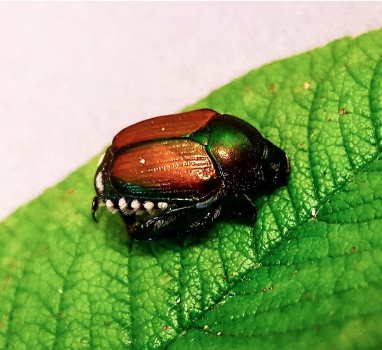 Japanese beetles are a major pest of gardeners every year. They appear in late June to early July, and can be seen until September. They feed on foliage or flowers, and are a major pest. Often skeletonizing ornamental trees and shrubs, and garden plants. The beetles are around a ½ inch long, and are shiny green metallic. They have coppery brown wing covers, and six white patches along the side of the body.

Control
Cultural: Only a few insects are needed to do a great amount of damage. In a small gardens it can be practical to remove the beetles by hand from plants. These should be crushed or destroyed, as the beetles are strong fliers and can reinvade from surrounding areas. Placing cheese cloth or other light covering over the plant before infestation can work as a preventative.

Chemical: Several insecticides are labeled for use against adult Japanese beetles. Always follow label directions, and treat foliage and flowers thoroughly. For optimal control, apply in the afternoon when beetles are most active. Often you need to apply every 5 to 7 days for several weeks. Recommended synthetic insecticides contain carbaryl, acephate, cyfluthrin, rotenone, or bendiocarb. Systemic insecticides, which are applied in spring and taken up by the roots, work fairly well for killing Japanese beetles eating foliage. However, systemic insecticides don’t translocate well into the flowers so aren’t helpful in reducing flower damage. On the organic spectrum, Neem oil (azadirachtin) and spinosad (spinosyn) are both effective organic insecticides for Japanese beetles.